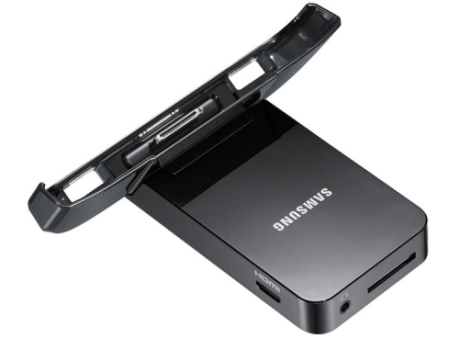 Hoping to get your hands on the Samsung Galaxy Tab, but can’t stand the thought of using the Android tablet without a physical keyboard? No worries. Samsung is bringing an official keyboard dock to market. It’ll have 83 keys, a charger and audio jack and it’s designed to work in portrait mode. It’ll run £69.99 in the UK.

The company is also launching a whole range of other accessories, including:

All of the accessories should be available on November 1st in the UK, although the keyboard dock will be available exclusively through Carphone Warehouse at launch.

Noticeably absent from the list is the Bluetooth stylus which was spotted a few weeks ago.

Yes, you could probably find cheaper cases, speakers, memory cards, and other accessories if you decide not to go with the official products. But it’ll probably be a little while before we see third party keyboard docks for this tablet… at least if you’re looking for one that can charge the tablet while you’re typing. I suspect there may be a number of existing Bluetooth keyboards that will work just fine with the Galaxy Tab in portrait or landscape mode.

There’s no word on which of the accessories will be available in the US or how much they’ll cost. But then again, we’re still waiting on final pricing for the tablet itself in the States, so that’s not too surprising.

via Engadget and TechRadar