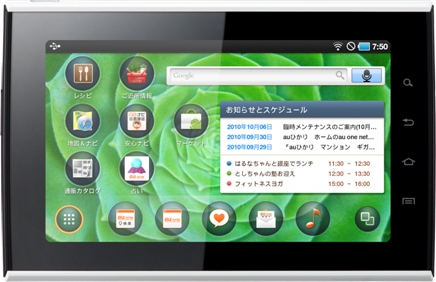 While Samsung is busy pushing its Galaxy Tab Android tablet in the US and Europe, the company has teamed up with KDDI in Japan to offer a (somewhat) different device. The SMT-i9100 has almost the same specs as the Samsung Galaxy Tab, but it’s WiFi only and has a boxier looking design.

We’ve seen Samsung design different cases for multiple products that are essentially the same before. The company offers four different versions of the Samsung Galaxy S phone in the US, for instance — one for each major US wireless carrier. And they all look different, even though they all have the same basic specs.

Like the Samsung Galaxy Tab, the KDDI SMT-i9100 has a 7 inch, 1024 x 600 capacitive multitouch display, 802.11b/g/n WiFi and Bluetooth. This model has 512MB of RAM, 4GB of internal storage and comes with a docking cradle. It runs Google Android 2.2 and the press release claims the tablet has a 2 hour battery — which seems either like a typo or like something might have been lost in Google Translation.

The tablet is due out in Japan in February.