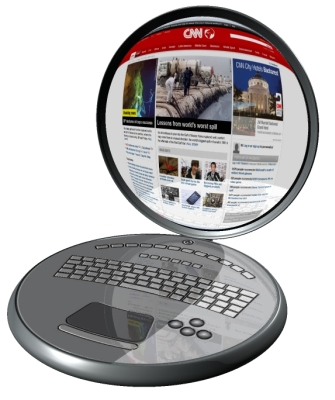 Have you ever looked at a traditional laptop and thought “that screen is just too rectangular?” While folks have been debating the merits of 4:3 aspect ratios versus 16:9 displays, the folks at Revo Round in China have a completely different idea: a round laptop.

We’re not just talking about the screen either. The Revo Round Roundtop is a completely round laptop with a round display, round case, and even a curved keyboard, touchpad, and other elements to match.

Right now the whole thing appears to be in the prototype testing stages, which is probably a good thing — because seriously, would you look at the warped web site image someone Photoshopped onto the display? Is that how someone really think content should look on a computer display?

Even stranger than the laptop concept itself are the reasons the company developed the design. Apparently a researcher believes that staring at conventional rectangular screens will cause an evolutionary change that could Asian people to develop rounder, more Western style eyes within three generations.

Revo Round hopes that Roundtop technology won’t just be used for computers, but also for billboards and other displays in the future.

I may not be an evolutionary biologist, but I’m a bit skeptical of the premise that staring at computer screens will lead to biological changes — unless people with epicanthic folds in their eyes are for some reason unable to focus on computer screens which will lead them to have less successful careers, fail to to raise enough money to support a family, and die childless and alone thus putting themselves out of the evolutionary pool. Somehow I don’t think that’s happening though.

9 replies on “Revo Round introduces Roundtop computer for some reason”