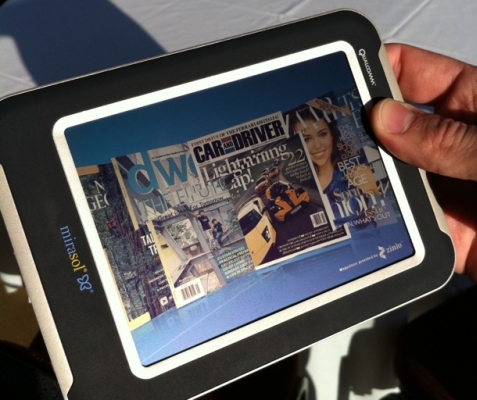 Qualcomm has been showing off its Mirasol display technology for ages. I got a chance to check out a prototype eBook reader with a Mirasol display at CES in January. But it looks like the displays won’t actually reach the market until early 2011. That’s according to GigaOm’s Om Malik, who caught up with the company last week.

Mirasol displays are low power, low cost color displays which are designed to be readable both indoors and out. In that way they’re similar to displays from Pixel Qi. The difference is that Pixel Qi is already producing its screens, while Qualcomm’s Mirasol displays won’t be available for a while. On the other hand, there still aren’t any actual products shipping with Pixel Qi displays yet, so maybe the race is still on.

Update: Engadget reports that Qualcomm is actually producing the displays now, and delivering them to manfuacturers — but we won’t see actual products that use the displays until early next year.