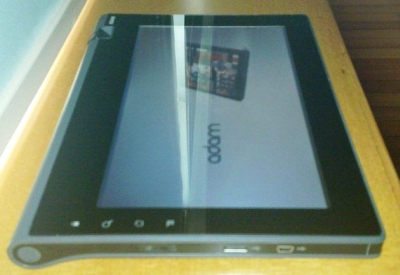 Battery life estimates are notoriously hard to predict, which is why we regularly see computer makers promising up to 14 hours and delivering only 7. So I’m going to suggest you take this news with a grain of salt, but Notion Ink’s Rohan Shravan says the upcoming Adam Tablet can run for 15 hours or longer on a charge.

The tablet has a 24Whr battery and a low power NVIDIA Tegra 2 processor. It uses very little energy, even when displaying 3D graphics using OpenGL. And some models of the tablet will be available with a low power Pixel Qi transflective display, which should reduce power consumption even further when you use the device with the backlight turned off.

Of course, the kind of battery life you get will depend on what you use the tablet for. Looping high definition videos with the screen set at full brightness will likely run down the battery a lot faster than surfing the web over WiFi, or listening to music with the screen shut off. Shravan says he may eventually offer an interactive chart that will let you select the activities you’re likely to run on the Adam tablet and give a prediction for how long the battery will last.

In the same blog post, Shravan also says he believes the Adm tablet has some of the best speakers around, and he points out that the USB ports will allow you to do things such as watch video from a USB flash drive without copying it first, as well as plugging in a mouse and keyboard.

I’m still trying to withhold final judgment until the Adam actually starts shipping, but if this Android tablet lives up to half its promise, it might be one of the most exciting things to hit the tablet space since… well, ever.

Update: Shravan has clarified that it’s certainly possible to run down the battery in as little as 6 hours.