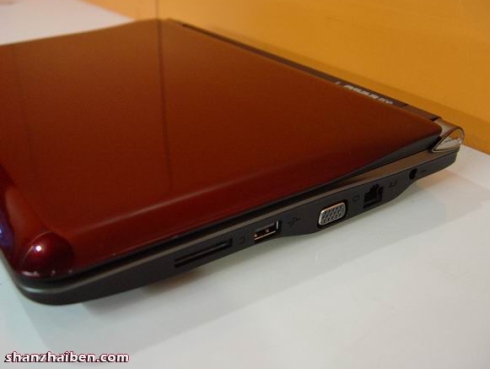 You’d be forgiven if you took one look at the new Laser One Chinese laptop and thought it was yet another variation of Acer’s Aspire One 10 inch netbook series. I’m pretty sure that’s what the manufacturer wants you to think after all. But als, it’s just another cheap knockoff.

Shanzhaiben reports that the Laser One is also both cheaper and larger than your typical Acer netbook, with a 12.1 inch display and $230 price tag. It also skips Acer’s typical keyboard design (with flat, wide keys) and instead uses a pretty traditional keyboard design complete with a row of Home, End, PgUp, and PgDn keys on the right side. I guess that’s the advantage of using a larger display than the notebooks you’re copying (although Acer doesn’t typically dedicate a full row to these keys even on its 11.6 inch laptops).

The rest of the specs are pretty typical, including a 1.66GHz Intel Atom N450 processor, 1GB of memory, and a 160GB hard drive. The laptop has a 6 cell battery and comes in black, red, blue or white.