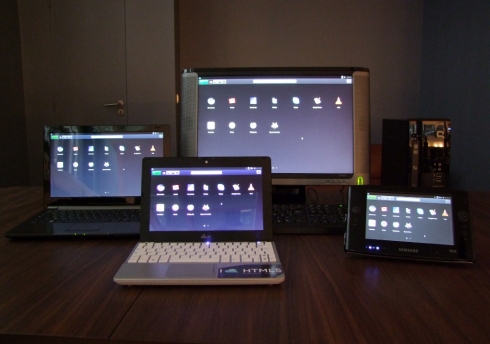 Jolicloud is a Linux-based operating system that’s designed to blur the lines between desktop and web apps while adding a social layer to software by letting you see what apps your friends are installing. The project launched as an operating system aimed at netbooks — but today Jolicloud founder Tariq Krim announced that Jolicloud 1.1 will broaden its horizons with support for all sorts of desktop, notebook, and tablet computers.

Jolicloud includes the Google Chromium web browser (the open source development version of Chrome), and support for Adobe Flash. It has a sort of app store, allowing you to download and install apps, or create desktop icons for web apps such as Gmail or Facebook. And it supports hardware graphics acceleration on some mobile devices — Krim says that a netbook with and Intel Atom N550 processor can handle 1080p HD video playback and 720p HD YouTube video playback. Most PC makers only claim notebooks with that chipset can handle 720p HD video while running Windows 7.

Jolicloud 1.1 also reportedly boots faster, with the entire operating system loading in 20 seconds or less on many computers.

8 replies on “Jolicloud 1.1: It’s not just for netbooks anymore”