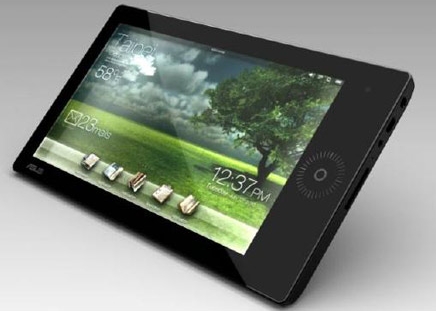 Asus started showing off concept designs for a series of upcoming Eee Pad tablet computers in June, but the company isn’t expected to ship its 8.9 inch Android tablet until March, 2011.

At first, Asus has planned to deliver that tablet with Windows Compact 7, but later dropped that plan in favor of Google Android. Now it looks like Asus may also be retooling the look and feel of the tablet a bit.

Israeli news site Ynet has posted some new images of the Eee Pad EP90 8.9 inch Android tablet, and it appears to have a slightly thicker bezel, a more iPad-like home button on one side, and a darker case. Interestingly, the images still show the same custom user interface that Asus has been showing off since June, suggesting that either Asus has figured out how to develop the same UI for Android that it had planned to use with Windows Compact 7 or we shouldn’t put too much stock in these rendered images.

According to Ynet, the Asus EP90 will have a 1024 x 600 pixel display and a 1GHz dual core NVIDIA Tegra 2 processor. It will reportedly ship with an office suite, PDF reader, and eBook/magazine apps from Amazon, Aldiko, and Zinio. Those specs are similar to the ones Asus has been throwing around for months, but this is the first time I’ve heard anything about the software that will run on the tablet — aside from the operating system.

2 replies on “Has Asus redesigned its 8.9 inch Android tablet?”