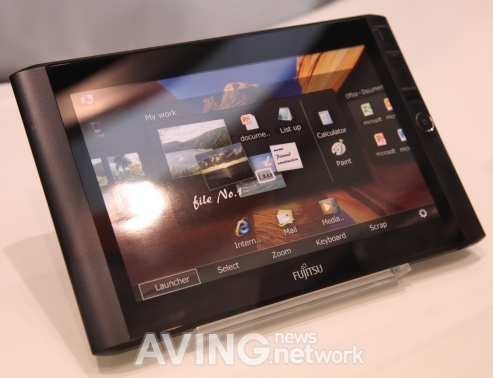 While the hardware looks interesting, I’m most intrigued by the custom software these tablets appear to be running. One model has a series of buttons along the bottom of the touchscreen display labeled Launcher, Select, Zoom, Keyboard, Scrap, and settings. These sound like handy buttons to have on a touchscreen device running an operating system that was primarily designed for keyboard and mouse input.

The tablet also seems to have a custom program launcher which looks like it might be easier to flip through with a fingertip than the typical Windows start menu. That particular tablet also has a hardware button for locking the screen rotation, a switch for turning the wireless on and off, and a power button. There’s also a biometric fingerprint scanner, which is a pretty good indication that Fujitsu doesn’t expect to market this tablet as a budget device. 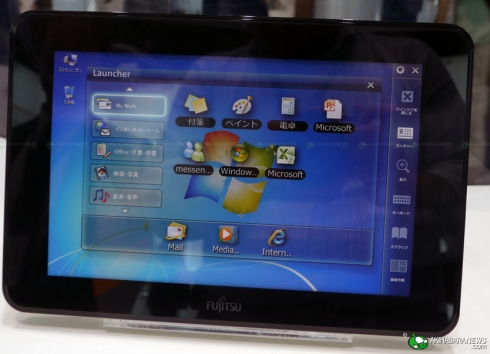 The other tablet doesn’t appear to have any hardware buttons around the side of the display, although there may be some on the edges. I just can’t see from the handful of photos that are available. This tablet has rounder edges and I get the impression that it might be more of a consumer oriented device, but I can’t decide if that’s just because I don’t see a fingerprint scanner or if the glossy black bezel just reminds me of other cheap tablets I’ve seen.

This model also has a custom app launcher, but it looks quite different, featuring a few tabs for areas such as “My Work,” “Office,” music, or movies.