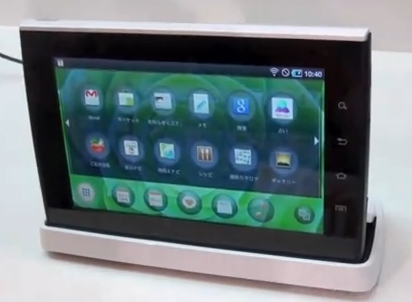 KDDI plans to offer a 7 inch Android tablet built by Samsung soon in Japan. While the specs are awfully similar to the Samsung Galaxy Tab which is coming to the US and Europe, the Japanese model has a different name, case, and a few different features. Yesterday we met the KDDI SMT-i9100 tablet from Samsung. Today we have a few videos of the tablet in the wild… unfortunately they’re in Japanese, but they should provide you with an idea of what the little guy looks like.

KDDI put out a video discussing the tablet’s specs, while YouTube user 888Street got a chance to check one out at some sort of event. It looks like there’s a software shell running on top of Google Android. I haven’t used the Galaxy Tab, so I can’t say how much like the Galaxy Tab software it is.

It’s also interesting that the demo unit appears to have icons for Gmail, the Android Market, and other Google apps… even though the KDDI version of the tablet is WiFi-only. Normally Google doesn’t allow those apps to be installed on devices that can’t make phone calls.

The tablet has a compact, angular design that reminds me a bit of the Stream TV eLocity tablet. In fact, even the buttons are in the same place. It’s not clear whether the SMT-i9100 and the Stream TV eLocity ar related somehow, but the eLocity has an 800 x 480 pixel display and an NVIDIA Tegra processor while the KDDI tablet has a 1024 x 600 pixel screen and a Samsung Hummingbird processor.

You can check out the videos after the break.