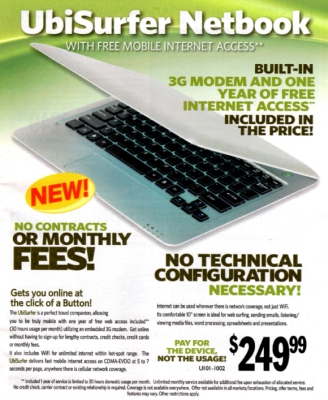 I’ve been keeping an eye on DataWind’s UbiSurfer netbooks for the past few years. The company offers cheap mini-laptops in the UK bundled with limited mobile internet service. You pay one fee up front for the netbook and you can also go online for about 30 hours per month for no extra fee. If you need more time, you can pay for a monthly plan.

There are a few catches. First, historically that mobile internet service has been sub-3G, meaning you may get internet access on the go, but you don’t necessarily get fast internet on the go. Second, the Ubisurfer line of mini-laptops typically runs a very basic version of Linux or Windows CE rather than a more powerful operating system such as Windows or Ubuntu Linux.

Now it looks like DataWind is finally bringing its business model to America — and it looks like the company has a few upgrades in store for the US version. First, the US version of the DataWind Surfer will apparently have a 10 inch display instead of the small 7 inch screen on older models. Second, the company will offer 1 year of CDMA-EVDO 3G mobile broadband service along with the purchase price.

In other words, you pay $249.99 and get a mini-laptop and 3G access for 12 months. The only catch is that the plan is limited to 30 hours per month. Still, that’s a pretty good deal.

Unfortunately we don’t actually know anything about the notebook’s specs yet. There’s no information about the processor, memory, storage, or operating system. The folks at Gadling found a listing for the US version of the UbiSurfer in a TigerDirect catalog, but the product isn’t available on the TigerDirect web site and there’s no mention of it on the DataWind web site.