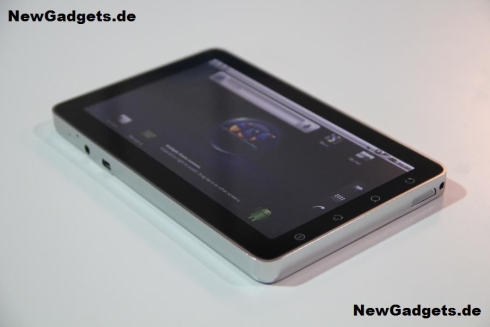 ViewSonic is showing off its new 7 inch Android tablet at the IFA show in Berlin this week. The show doesn’t officially get underway until Friday, but Johannes from NewGadgets.de managed to get a little alone time with the tablet and he’s posted a series of photos as well as a video which you can check out after the break.

The ViewSonic ViewPad 7 runs Google Android 2.2 and has 3G and WiFi capabilities as well as Bluetooth, A-GPS, and Bluetooth. There’s a SIM card slot and two cameras (a VGA front-facing camera and a 3MP rear camera). The tablet also makes phone calls — although you’ll probably want to use a Bluetooth headset since it’s a bit large to hold up to your head.

The tablet looks pretty nice, and it has a capacitive multitouch display and four Android buttons on the front of the device, which makes the tablet a lot easier to use than some Android tablets I’ve seen. Engadget reports that the tablet has a 600MHz Qualcomm Snapdragon CPU, but it seems very responsive in Johannes’ video.  There’s also support for Adobe Flash.