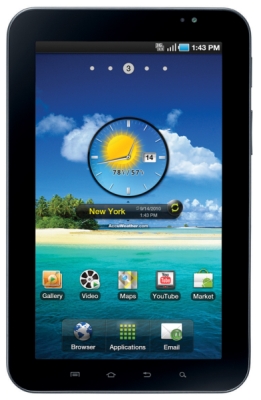 Samsung may have announced last night that all four major US wireless carriers will offer the Samsung Galaxy Tab 7 inch Google Android tablet. But each of those carriers put out press releases of their own, explaining some of the launch details.

Nobody’s saying anything about pricing yet, and it looks like the tablet could roll out slowly to each carrier over the next few months. AT&T and T-Mobile are only promising to have the Galaxy Tab in stock by the holiday season, while Sprint says it will carry the Tab “this fall.” Meanwhile Verizon says it should be available “in the coming weeks.”

It sounds to me like Verizon could be shaping up to be the first carrier to offer the tablet, although Sprint’s “this fall” comment leaves the door open for the company to edge out Verizon.

Still, the fact that the Tab will be available from all four major wireless carriers gives Samsung a leg up on Apple, which has only partnered with AT&T to provide 3G service.

Verizon also says it will bundle its V Cast services with the tablet, including V Cast Music, Video on Demand, Song ID, and Verizon Navigator as well as several games. AT&T will bundle its AT&T Connection Manager software, for connecting to AT&T WiFi hot spots.

5 replies on “Verizon to be first US carrier to offer the Samsung Galaxy Tab?”