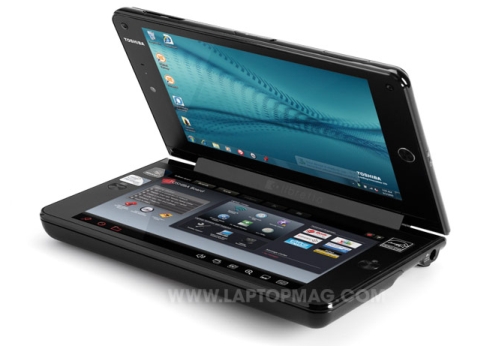 The Toshiba Libretto W105 is a dual screen device that you can think of as a touchscreen tablet with a virtual keyboard, or a mini-laptop without a physical keyboard. Either way, it’s one of the most unusual computer products to actually make it to market this year. With prices starting at $1100, Toshiba doesn’t expect to sell a lot of these little devices, but if it proves popular, perhaps we could see a price drop or see this type of technology incorporated into other devices.

Laptop Magazine has published a detailed review of the Libretto W105, and if you’re at all curious about whether a dual touchscreen device like this can function effectively as either a laptop or a tablet — or you know, as that thing you surf the web, check your email, and write on, you should check out the full review.

Here’s the short version: It’s thin, light, and sexy as all get out with excellent build quality. Windows 7, on the other hand, isn’t all that touch-friendly, but Toshiba has made some enhancements including a virtual touchpad and 6 different virtual keyboards. Laptop wasn’t that impressed with the built in eBook reader application, but had good results with the Amazon Kindle for PC app. The reviewer was also satisfied with the overall performance. The 2:45 battery life, on the other hand, is pretty subpar — especially for a $1100 device.