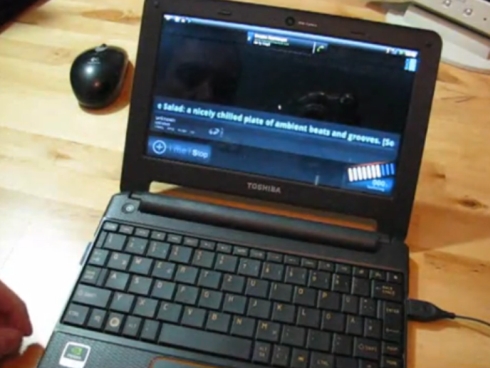 The Toshiba AC100 is a 1.9 pound laptop with an NVIDIA Tegra chip, a 10 inch, 1024 x 600 pixel display, and Google Android 2.1. Google doesn’t officially support Android for notebooks, so Toshiba developed some custom software for the device allowing it to work with a touchpad, for instance. Toshiba also ships the AC100 with Opera set as the default browser instead of the typical Webkit-based browser that ships with Android, although the standard browser is still available.

On the other hand, the laptop doesn’t ship with some apps that come standard on most Android smartphones, including the official Gmail app, Google Calendar, and the Google Android Market.

That makes loading third party apps a bit clunkier, but not impossible. Chippy at Carrypad has been testing a Toshiba AC100 for a few weeks, and he’s posted a lengthy video showing how the device handles a number of third party apps. In order to install them, he had to install the apps first on an Android phone or other device with the Android Market, backup the apk installer files to an SD card, and then copy them to the Toshiba AC 100 and use a file explorer to find them, click on them, and install them.

So how did it go? Well, Docs to Go looks great. It’s a basic office suite which lets you view and edit Microsoft Office documents including spreadsheets, Word docs, and PowerPoint presentations.The NewsRob news reader works, but it looks a bit funny on a 024 x 600 pixel display.

Chippy says many games don’t work properly, but some do using keyboard controls.

There’s also no GPS or other location identification hardware, which will prevent many apps from running – including social networking apps like Seesmic which normally request your location. Google Maps works, but you can’t zoom into your current location without manually setting it.

Chippy also managed to load the Astro File Manager, Photoshop Express, the WordPress Android app and several other apps. You can see how they all perform in the video after the break.