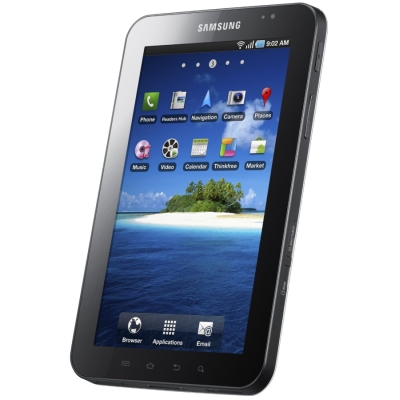 The Samsung Galaxy Tab made a huge splash when Samsung introduced the Android tablet at IFA in Berlin last week. The tablet has a 7 inch, 1024 x 600 pixel display with a capacitive touchscreen. It has a zippy 1GHz processor, a 3G modem, and complete access to the Google Android Market which means you can choose from around 100,000 apps to install with the tap of a finger. But Samsung still hasn’t made it clear just how much the tablet will cost, which could be the key to its success.

While some folks are calling the Galaxy Tab one of the first Android tablets that could really take on the Apple iPad, others suggest that it will be priced too high to make a dent in the tablet market.

On the other hand, the Wall Street Journal suggests that the tablet could be much cheaper when you purchase it from a wireless carrier with a 3G service plan. In fact, a Samsung executive tells the paper that it will “likely retail for between $200 and $300.”

That would make the Samsung tablet cheaper than the iPad… at least up front. But Apple has worked out a deal with AT&T to offer relatively inexpensive 3G data plans, ranging from $15 to $25 per month. It’s not clear whether you’ll get that good a deal on a mobile contract for the Galaxy Tab. On the other hand, you can use the Galaxy Tab to make phone calls, which is something you can’t do with an iPad. So if you’re willing to use a Bluetooth headset (or hold a 7 inch tablet up to your head), the Samsung tablet could theoretically replace both an iPhone and an iPad, which might help put those prices into perspective… but right now we still don’t really know the final price. All we have to go on are rumors and speculation.