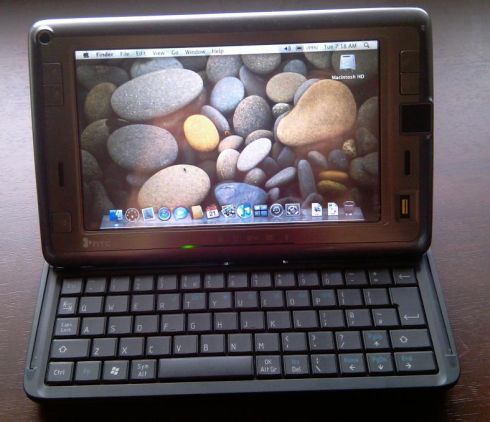 The HTC Shift is a 7 inch tablet that came out a few years too early to be considered a serious contender in the current tablet climate. But spec-wise it still looks pretty good. The tablet has an 800 x 480 pixel touchscreen, an 800MHz Intel A110 CPU, and it was designed to dual boot Windows Vista. But thanks to the x86 processor, some users have updated the device to run Windows 7… and one user recently posted instructions for installing OS X on the HTC Shift.

WiFi, Bluetooth, and the fingerprint scanner aren’t working, but everything else is supported, including the integrated graphics processor.

Bear in mind, installing OS X on non-Apple hardware is a violation of the EULA, and it’s illegal to download a hacked version of the operating system from the internet, even if you’ve already paid for a copy of OS X. That said, if you want to install the operating system anyway, I suppose it’s nice to know that it’s possible. On the other hand, I’m not sure I’d want to use a Shift running OS X if it means the only way to get online is to use an Ethernet connection. You might want to hold off until the WiFi issue is resolved.

8 replies on “OS X crammed onto an HTC Shift tablet”