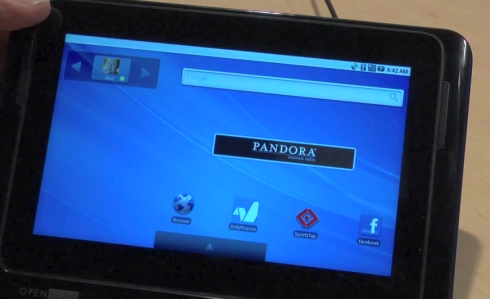 OpenPeak has been showing off press shots of its OpenTablet 7 for a little while, but this week the company actually brought the tablet out to play at the Intel Developer Forum, where a number of tech journalists and bloggers finally got a chance to play with it.

You can check out some hands-on impressions and videos courtesy of GottaBeMobile, SlashGear, and Laptop Magazine.

The demo unit was running Google Andorid 2.1 and had a 7 inch, 1024 x 600 pixel capacitive touchscreen display. It has front and rear cameras, and uses an Intel Atom Moorestown processor. The OpenTablet 7 has 2GB of memory between 8GB and 64GB of flash-based storage.

OpenPeak aims to distribute the tablet through partners. Right now, AT&T is the only company that’s announced a partnership with OpenPeak, so you can be pretty sure that the AT&T model will come with a 3G module. A WiFi-only version is also a possibility.

What’s more, thanks tot he Atom processor, I suspect that Google Android isn’t the only OS capable of running on this little guy. It should be relatively easy to install Windows, Linux, or any other operating system of your choice thanks to the x86 CPU. Early on, OpenPeak suggested that the custom user interface for the tablet would be powered by Adobe Flash, although it looks like the company decided to go with Android instead… at least for now.

Update: My bad. I forgot that Moorestown chips don’t officially support Windows… at least not yet.