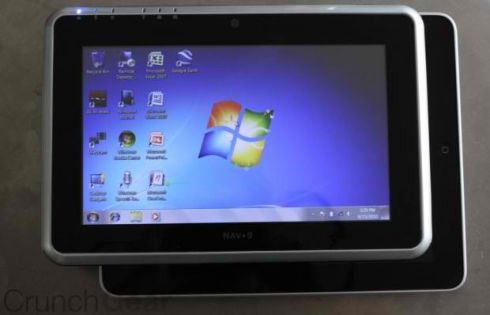 The folks at Netbook Navigator have been threatening to send me a demo unit of their new 8.9 inch Windows tablet for months. Apparently they decided to send one to the folks at CrunchGear instead, because the site has just published a review of the tablet.

The long and short of it is that CrunchGear feels the Nav9 is pretty good for a Windows tablet… but they’re not entirely sure why you’d want a Windows tablet. Unfortunately, the review does more telling than showing, with the reviewer repeatedly suggesting that Windows 7 isn’t well designed for touchscreen tablets, but never really explaining why, or how that affects this particular device.

My own two cents is that the default WIndows on-screen keyboard is much more difficult to use for touch-typing than the iPad keyboard and I’d only ever want to use it to enter URLs or other short bits of text. It’s also hard to accurately hit smaller Windows elements such as individual files in the Windows Explorer in list view, or items in the start menu, and especially close, minimize, and other toolbar buttons using a fingertip. These elements were clearly designed with a more precise input than your finger in mind.

But here’s the thing: The Nav9 actually has a multitouch resistive touchscreen. While you can use your fingertip to navigate, you can also use a stylus for more precise input and even for handwrirting recognition, which is probably faster than using the on-screen keyboard for text entry.

Windows 7 Home Prmeium does have some touch optimizations built into it, including touch-friendly commands for Internet Explorer. Of course, I can’t really comment on the experience of using this particular tablet, because I haven’t tried it. And I haven’t found a Windows 7 tablet in this price range (the Nav9 starts at $599) that I really like either — but most have come either with capacitive displays that are ill-suited to Windows navigation, or slower processors that make the OS feel sluggish — which CrunchGear says isn’t really a problem with this model.

You can check out the full review at CrunchGear.