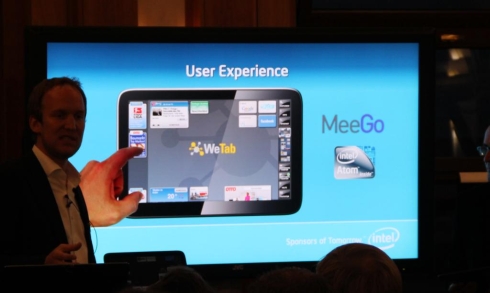 The Neofonie WeTab gained grabbed a lot of headlines when the company first introduced it a few months ago. And why not? The tablet is kind of everything the Apple iPad is not. It has a nice big 11.6 inch, 1366 x 768 pixel HD capacitive toushcreen display. It supports HDMI output, has 2 USB ports, and a 1.3MP camera. It also packs 802.11a/b/g/n WiFi and Bluetooth 2.1.

The tablet also has a 1.66GHz Intel Atom N450 processor, which means it can run a variety of operating systems including Windows, Linux, or even OS X if you care to hack your way into creating a hackintosh tablet. But while early reports suggested that the tablet would run a custom version of Linux or even Google Android, it looks like the tablet will actually ship with MeeGo Linux and a custom widget-based user interface running on top.

Johannes from NewGadgets.de grabbed some one-on-one time with the latest version of the WeTab, and he shot a little video, which you can check out below. You can also find more photos at NewGadgets.de.