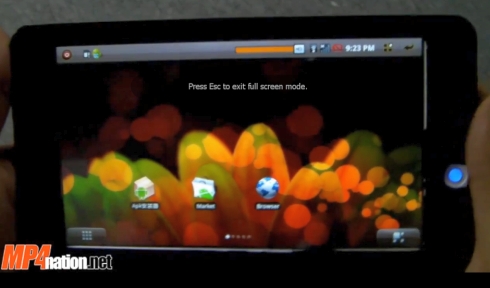 Nationite is launching a new 7 inch tablet with a 600MHz Rockchip RK2808 processor, an 800 x 480 pixel resistive touchscreen display and Google Android 1.5. If that doesn’t sound too exciting, it’s because for the most part it isn’t. But there are a few things that make the Rocktab stand out a bit.

First, it has  G-Sensor, which isn’t exactly revolutionary, but it’s not something that every cheap Android tablet has. This means that you should be able to play games that take advantage of an accelerometer. The tablet will also feature screen auto-trotation.

Nationite is also pitching the tablet as supporting the full Google Android Market. Of course, it will only run apps that support Android 1.5… and I get the feeling that like other Chinese tablet makers the company may have installed the Android Market without first seeking permission from Google. But that’s just a hunch for now.

The folks at MP4Nation have posted a detailed video review of the tablet, and while it runs Android 1.5, it appears the tablet has a customized version of Android which runs pretty well on the hardware. The best part? Nationite expects a version of the tablet with 2GB of storage to sell for under $140.

You can check out the MP4Nation video after the break.