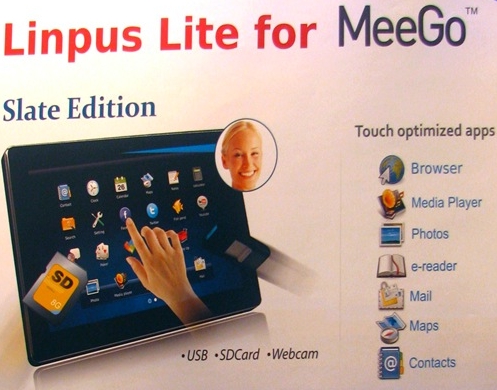 MeeGo is a Linux environment designed for mobile devices with small displays, including netbooks, smartphones, in-car entertainments systems and tablets. So far, only the netbook version has been released to the general public, but the slate version is due out soon, and one of the first Linux software distributions looking to take advantage of the MeeGo’s Slate UI is Linpus.

You may remember Linpus as the company that developed the operating system used by early Acer netbooks. While Linpus might not exactly be a household name, the company does have experience working with major PC makers, which makes it a little more likely that we’ll actually see Linpus Lite tablet Edition ship on real products from companies you’ve actually heard of.

Chippy at Carrypad got a chance to meet with the Linpus folks recently, and he reports that the company plans to ship the tablet Edition software in the fourth quarter of 2010.

He also points out that in addition to a touch-friendly user interface and support for touch gestures, Linpus Lite Tablet Edition will include a series of apps designed to work with touchscreens, including a web browser, media player, photo viewer, eBook reader, mail app, maps app, and contact manager.