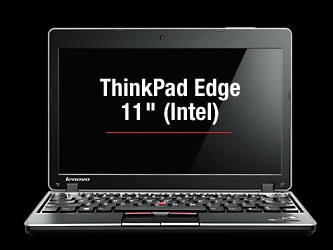 Lenovo has added a new 11.6 inch ultraportable laptop to its business-class ThinkPad line. While the company’s first 11.6 inch budget ThinkPad notebook, (the Lenovo ThinkPad X100e), ships with an AMD processor and ATI graphics, the new ThinkPad Edge 11 will be available with a choice of AMD or Intel chips.

Unfortunately, it looks like the Lenovo ThinkPad Edge 11 will not be sold in the US at launch. Instead Lenovo plans to continue offering the X100e in the States while making the Edge 11 available elsewhere in the globe.

The good news is that while business-class notebooks typically have business-class prices, the ThinkPad Edge also has a reasonably affordable starting price of about $449, which makes it a bit pricier than some consumer focused 11.6 inch models such as the Acer Aspire 721 ($418)

, but $449 really isn’t bad at all for a machine with as many otions as the Thinkpad Edge.

The base model comes with an 11.6 inch, 1366 x 768 pixel glossy display, an AMD Vision Pro Athlon chip, Windows 7, and WiFi. You can step up to an Intel powered model for $549, with a choice of an Intel Core series processor or a Pentium chip.

The laptop is 1.1 inches thick and weighs about 3.3 pounds. Like the ThinkPad X100e, it has both a touchpad and a Lenovo TrackPoint button in the middle of the keyboard. The keys are flat with curved edges, sort of like the X100e.

Other options include a 3G or 4G module, a choice of a 3 or 6 cell battery, and an optional Lenovo USB Power Hub (which runs an extra $75).

Engadget’s Joanna Stern has posted a review of the ThinkPad Edge 11 with a 1.33GHz Intel Core i3 U380 CPU. It fared pretty well against the competition in most benchmarks, but I suspect if she had reviewed the AMD version the numbers might tell a slightly different story.

While the ThinkPad Edge 11 isn’t available in the US, Lenovo UK’s web site does show images for the 11 inch AMD and Intel models… it just doesn’t include product pages or purchase links yet.