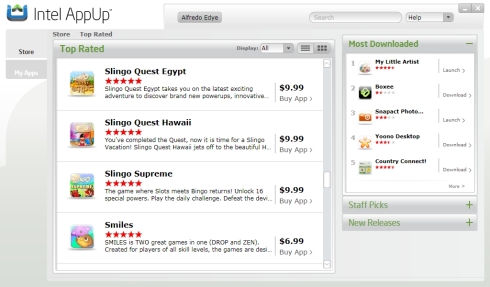 Intel has been showing off its app store for netbooks and other devices with Intel Atom chips since January. But the company officially launched version 1.0 today, as well as agreements with Best Buy, Dixons, and Croma to distribute computers with the AppUp center reinstalled in the US, UK, and India respectively.

Asus is also expected to load the Asus App Store on all future netbooks starting in October. The Asus app store is a branded version of Intel’s AppUp center.

Like other mobile app stores, the Intel AppUp center features free and paid apps from third party vendors which can be downloaded and installed. There’s also a 24 hour trial period for all apps, allowing you to cancel a purchase if you decide you don’t want to keep an app.

What these apps all have in common is that they were designed to to place nice with typical netbook hardware, including low power Atom processors and 10 inch or smaller displays with resolutions over 1024 x 600 pixels. The AppUp Center is available for both Windows netbooks and machines running MeeGo Linux.

The AppUp Center is also available for download for Windows XP, Windows 7, and MeeGo Linux (click the Moblin link), if you don’t feel like buying a new netbook just yet.

Netbook news also got a chance to spend some hands-on time with a new tablet-specific version of AppUp. I suspect we’ll also see versions for internet connected TVs and other devices with Atom chips soon.