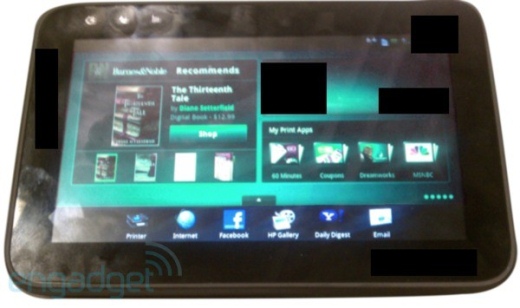 Smudges and all, HP’s upcoming Zeen tablet has been photographed in the wild. The Android-powered tablet is set to ship in the coming months as part of a bundle with the Zeus photo printer. As you can see in the image (with some squinting, of course), there’s an unsurprising emphasis on print apps including offerings from HP themselves, MSNBC, 60 Minutes, Dreamworks, and Yahoo. Facebook, Internet, and Email icons are also displayed — so the tablet should offer a decent amount of functionality.

Considering the printer/tablet bundle will probably only set you back $399, the Zeen-Zeus pairing may be a very enticing option for those in the market for a low-cost Android tablet. As long as you’re looking to pick up a printer, too, of course.

Engadget reports that the Zeen’s software has been refined and previously-reported touchscreen issues have been addressed, but there are still some kinks to iron out. They’re also reporting that the standalone Zeen SKU has been cancelled — so it’ll only be available as part of the bundle.