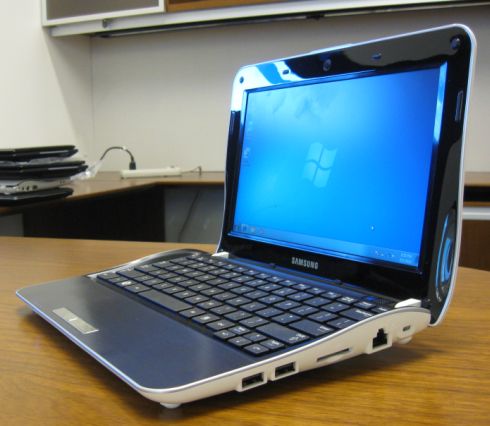 I got a chance to check out a pre-production unit of the Samsung NF210 netbook today. This mini-laptop was first announced way back in… well, yesterday. But it won’t hit the streets in the US for another few weeks, and I learned today that it will actually be a Sam’s Club exclusive in the States, where you’ll be able to pick this curvy netbook up for $379.99.

The Samsung NF210 has a 1.66GHz Intel Atom N455 processor, a 10.1 inch, 1024 x 600 pixel display, and one of the most unusual designs I’ve seen in a netbook, with a curved body and a recessed keyboard situated between two fins, waves, or whatever you want to call them. While I’m not 100% sold on the overall design, which serves to make the netbook a bit wider than many others in its class, there are a few things I really like about this and other Samsung netbooks.

First, Samsung added a thin lip to the top of the display, which makes it much easier to grab and open the lid when the laptop is closed. Second, the touchpad is perfectly level with the palm rest area around it, but thanks to a bumpy textured surface, you can easily detect the edges of the touch area without looking down at your fingers. Third, the display is matte, which makes it easier to see in direct sunlight.

Probably the most compelling feature of this 10 inch netbook though, is its battery. Samsung is shipping the NF210 with a 6 cell, 8850mAh battery which the company says should provide up to 14 hours of run time. I’ll be putting that claim to the test when I receive a review unit later this month, but it’s a pretty bold claim, even as other netbook makers push their run times past the 10 hour mark.

You can check out more hands-on photos of the Samsung NF210 below. I’ve been told that the color scheme isn’t final. The finished product will have an “espresso” color scheme.

Samsung will also soon launch the NF310 netbook in the US. That model will be physically quite similar to the NF210, but it will have a metallic finish (although it will still have a plastic case). The Samsung NF310 will also have a dual core Intel Atom N550 processor and a 10.1 inch, 1366 x 768 pixel display. Final pricing for that model hasn’t been set, but Samsung says it will likely cost $429 or less. Unlike the NF210, the NF310 will be available through a variety of retailers.

Samsung also plans to continue offering the Samsung N150 netbook for customers that don’t feel like visiting Sam’s Club or paying more for snazzy design elements and extra battery life. The Samsung N150 has a MSRP of $349, but it regularly sells for far less than that