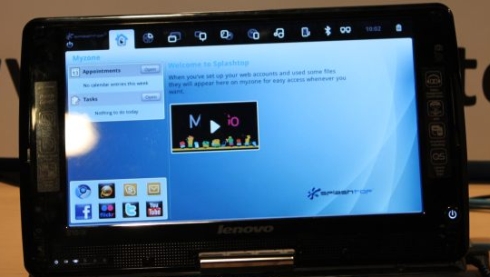 DeviceVM’s Splashtop quick boot software is designed to let you run a handful of apps including a web browser, Skype, and email software without waiting for Windows to boot on your computer. It comes preloaded on a number of netbooks and laptops from major PC makers. Today DeviceVM announced that future versions of Splashtop, which is already based on Linux, will use MeeGo Linux technology.

That means that the user interface will look more like the standard Meego experience. more importantly, it also means that you’ll be able to install third party software using the Intel AppUp center. Right now there’s no easy way to install extra apps in Splashtop.

Laptop Magazine reports that DeviceVM will also offer remote desktop software for Splashtop that will allow users to quick-boot their computers and then remotely control a desktop or another computer.

You can check out Laptop’s hands-on video after the break, although the new MeeGo-powered version of Splashtop isn’t expected to ship until next year.

One reply on “DeviceVM Splashtop to use MeeGo Linux”