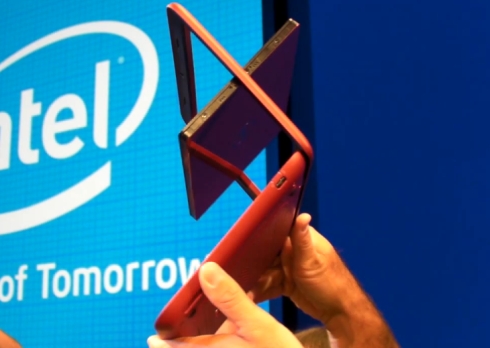 We’ve seen a lot of companies introduce slate-style tablets without physical keyboards over the past few months, but once upon a time the words “tablet computer” brought up a different image — of a laptop with touchscreen display that you could fold down over the keyboard. Despite all the buzz around slates, and the launch of its own Dell Streak 5 inch tablet, Dell appears to be giving the old fashioned convertible tablet design a try.

Today at the Intel Developer Forum in San Francisco, Dell showed off an upcoming device called the Dell Inspiron DUO. It’s a 10 inch laptop with a rotating touchscreen display. The device has a dual core Intel Atom N550 processor and runs Windows 7 Home Premium. What’s interesting is that the display doesn’t actually have a swivel — instead, the screen rotates inside the bezel, so that it can face outward in tablet mode or inward if you open the computer up for use in laptop mode. You can see the screen rotation in the video after the break.

Dell will also offer a docking station that you can use for speakers (and presumably charging) while the computer is in slate mode.

Dell plans to launch the Inspiron DUO later this year. I’m holding off on calling this little laptop a netbook since it’s running Windows 7 Home Premium — which indicates to me that it’s going to carry a heftier-than-netbook-average price tag. But that’s probably just semantics.

I’m also pleased to see that Dell provided the Inspiron DUO with a touchpad that has distinct left and right buttons. It looks like the company is moving away from earlier designs which combined the touchpad and buttons into a single unit, making it much harder to drag and drop and perform other functions than was strictly necessary.