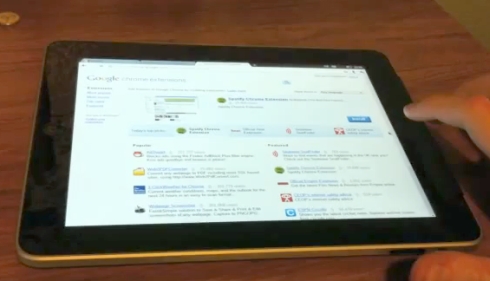 Yesterday we saw the first image of Chromium OS (a pre-release version of Google Chrome OS) running on the Apple iPad. Today we have the first video. Both come courtesy of Hexxeh, a hacker who has been compiling builds of Chromium OS from Google’s source code for just about as long as Google has been making it available.

The video is rather short, but it does show that the operating system can recognize touch input on the Apple iPad, which is pretty much all you need to be able to interact with the browser-based operating system. We don’t see any sort of an on-screen keyboard yet, but there does appear to be a mouse cursor which moves when you move your finger on the touchscreen.

Hexxeh also sent out a message this morning letting us know that Chromium for the iPad doesn’t yet support Adobe Flash, but it’s something he’s working on.

One reply on “Chromium OS on the iPad: touch input works, Flash doesn’t”