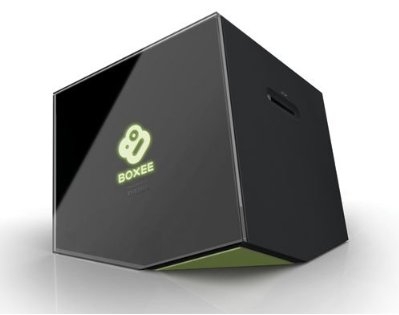 Earlier this year the folks at Boxee started showing off an unusually shaped set-top box designed to run the company’s media center software. I got a chance to check out an early prototype at CES and at the time it was sporting a low power NVIDIA Tegra 2 chip capable of playing 1080p HD video. Flash forward about 9 months and Boxee has finally started taking pre-orders for the Boxee Box — but the Tega chipset is gone. Instead it’s been replaced with a 1.2GHz Intel Atom CE4100 processor.

The Atom CE4100 was introduced about a year ago, and while Atom chips aren’t know for their graphics prowess (at least not without a little help), the CE4100 is capable of handling 2 simultaneous 1080p video streams. It supports H.264 video, 3D graphics, and Adobe Flash 10.

According to Boxee, the reason for the switch from Tegra 2 was that the Tegra chipset wasn’t capable of handling 1080p H.264 video as well as the Intel chip.

Personally, I just run Boxee on my PC and don’t feel the need to spend $200 on a separate box. But then, I’m one of those weirdos who plugs a full PC into my TV so I can record movies, watch web video, and surf the web from my couch. I also like the fact that I can run any software I like on the PC, including Windows Media Center, Hulu Desktop, Beyond TV, and Boxee — and if I feel like switching I can. My problem with set top boxes with dedicated software is that if the company goes out of business or changes directions, you could be left with a useless $200 box.

Boxee expects the Boxee Box to ship in November, for about $229. Pre-orders should start today, and you can sign up for more information on the pre-order page at Amazon

via NewTeeVee and Engadget