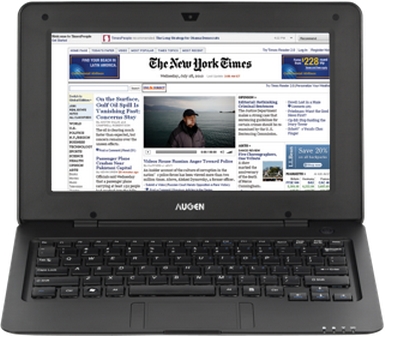 Augen made a bit of name for itself when the company teamed up with KMart to offer the 7 inch Augen GenTouch78 Android tablet recently. It’s not a very good Android tablet, but at $150, it was one of the cheapest Android tablets around this summer — and one of the only models you could walk into a bricks and mortar store and take home with you, at least in the US. Now Augen is aiming to recapture some of the magic with a 10 inch netbook running Google Android.

The GenBook 108 has a 2100mAh battery and comes with Quick Office software in addition to the usual array of Android apps including a web browser, email app, and media player. While you most likely won’t see the Android Market on this model, the Kmart product description does say the GenBook 108 supports a wide range of media formats including Xvid, DivX, WMV, WMA, and MOV (as well as the usual MP4 and MP3. That’s something you don’t see on every Android tablet — at least not without installing third party software.

One reply on “Augen 10 inch Android netbook now at Kmart”