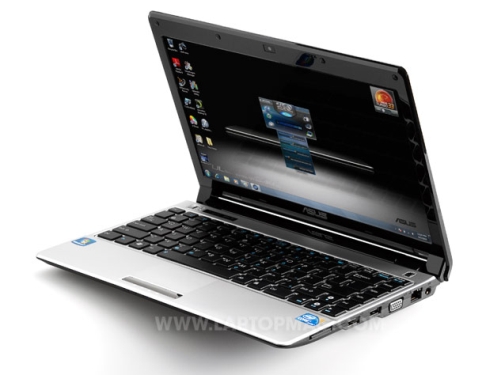 I’ve been using the Asus UL20A-A1 as my primary on-the-go laptop for almost a year. This 12.1 inch laptop strikes just the right balance for my needs. It’s a bit larger than a typical 10 inch netbook, but doesn’t weigh much more. It has a high resolution display that doesn’t feel cramped. And its ULV processor and Intel GMA 4500MHD graphics offer several times the performance you would expect from an Atom powered netbook while still running for over 5 hours on a battery charge.

This summer Asus released the follow-up to the UL20A-A1, and the folks at Laptop Magazine have posted the first review I’ve seen of the Asus UL20FT-A1.

The new laptop has the same 12.1 inch display and the same basic case design, but it swaps out the Core 2 Duo CPU for a newer 1.2GHz Intel Core i3-330UM processor with integrated graphics. The new model also comes with an HDMI port, something that was missing from the UL20A-A1.

Laptop didn’t really compare the UL20FT to the UL20A, but instead focused on whether the laptop offers a better value than the Eee PC 1215N which is about the same size and shape, but which costs $130 less than the $629 UL20FT. The difference is that while the Eee PC 1215N has NVIDIA ION graphics which boost the gaming capabilities of that laptop, it also has a low power Intel Atom processor which just can’t hold a candle to the Core i3 chip in the UL20FT.

Overall Laptop found the Eee PC 1215N to be a better value, but I’d say it depends on whether your prioritize graphics or CPU performance. On the other hand, the Asus UL20FT only got 4.5 hours of battery life, which sounds like a step back from the older Asus UL20A.