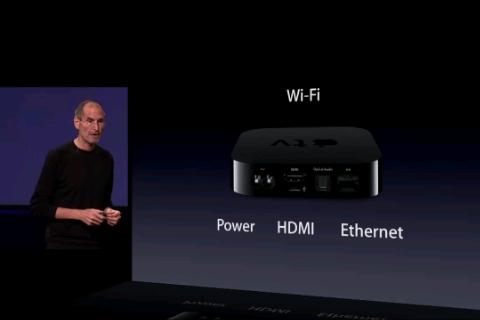 Apple has introduced a new version of the Apple TV. CEO Steve Jobs admits that the first generation never really took off, but after talking to some of happy customers who did pick up Apple TV units, the company thinks it’s come up with a better product in its second generation Apple TV.

The new box is 1/4th the size of the original, which is pretty cool. It’s designed to stream TV shows and movies from itunes, and supports Netflix Watch Instantly. Also pretty cool. The box supports 802.11a/b/g/n WiFi and Ethernet connections and has an HDMI port for pumping out audio and video to an HDTV.

But here’s what I’m a bit less sold on: It has no local storage to speak of, and doesn’t support video purchases. You can only rent movies and TV shows. New release movies will run $4.99 with back catalog titles going for less. TV episodes will be available in HD for rental for $0.99. That’s 1/3rd the price of purchasing an HD episode right now, but if you plan to watch your episodes more than 3 times, the rental model breaks down a bit.

The Apple TV does let you stream audio and video content from a PC or from an iPad, iPhone, or iPod touch using the new AirPlay function, though. And that means that if you’re not sold on the rental model you can still purchase content from iTunes and stream it to your TV wirelessly from another device. You just can’t store content on the Apple TV.

The new Apple TV will sell for $99 starting later this month. It will be available for pre-order today.