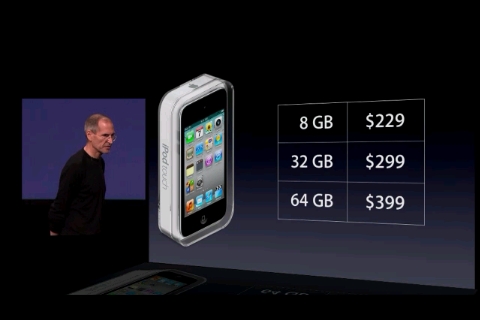 Apple has unveiled its next-generation iPod touch, with many of the features that make the Apple iPhone 4 stand out. The new model is thinner than the previous iPod touch, which is saying something. It also includes the new Apple A4 chip, a high resolution Retina display, and a 3-axis gyroscope.

The iPod touch will also features a front-facing camera with support for Apple FaceTime, allowing you to make video calls to other iPhone and iPod touch uses.

There will be 3 different models, with 8GB, 32GB, and 64GB of storage respectively, with prices ranging from $229 to $399. All three models will ship with iOS 4.1, which isn’t due out until next week. And that’s when the new iPod touch will ship as well.

So what do you think? Are you still thinking about picking up an Archos Android media player or does the new iPod touch look more attractive?

You can find detailed specs after the break.

The new iPod touch can handle H.264, MPEG-4, and J-MPEG video with resolutions up to 720p. There’s also an optional dock connector to VGA adapter for pumping out 576p and 480p video to an external display.