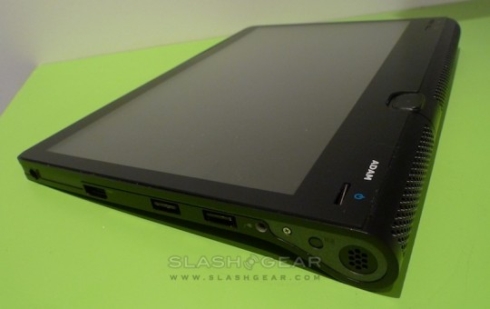 A little known company called Notion Ink started showing off an Android powered tablet prototype at CES in January. It was one of the hits of the CES show — even though Notion Ink didn’t have a finished product or a very large presence at CES, just a little space for meeting with reporters by appointment only.

Oh yeah, I suppose there were a few other reasons. Back in January the iPad hadn’t shipped yet, Google Android was (and still is) full of possibility, and while Notion Ink’s demo unit was carved out of wood it appeared to work very, very well.

But it’s August. And you still can’t buy the thing yet. So what happened?

SlashGear has the long and sordid story, and it involves skittish investors, disagreements with OEMs, and a whole lot of behind-the-scenes retooling. Notion Ink still plans to bring one of the most innovative Android tablets to market soon. And you’ll be able to get a version with a Pixel Qi display and Tegra 2 chipset. But it’s taking a lot longer than expected to bring the device to market.

If you’ve been wondering what’s behind the delays, you should definitely check out the SlashGear article. And keep in mind… it’s part one of a two-part series. Next up, SlashGear is promising to give us more details inclusion an actual launch date for the Adam tablet.