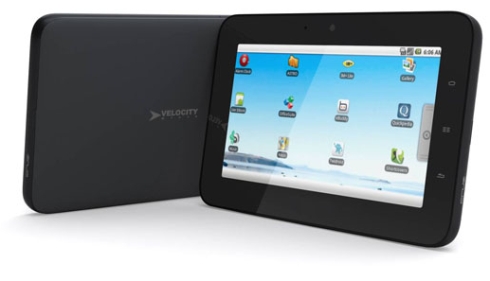 Velocity Micro is now taking orders for two Android tablets the company first introduced a little over a month ago. One is marketed as a 7 inch color eBook reader, while the other is pitched as a multipurpose Android tablet. Both are available for pre-order today, but won’t ship until early September.

The Cruz Tablet runs Google Android 2.1, features 512MB of RAM, and 4GB of internal storage space. It also comes with an 8GB SD SD card. The tablet has 802.11n WiFi, and a Lithium Ion battery which Velocity Micro says is good for 10 hours of run time.

I’m not saying that all resistive displays are bad, but Google Android was really designed for smartphones with capacitive screens and runs best on devices with similar hardware.

Both tablets come with “access to the Cruz Market,” which seems to be a pretty good indication that you won’t actually be able to access the Android Market on these devices.

The Cruz Reader and Cruz Tablet also ship with an eBook reader which lets you access the 2 million digital books in the Borders online book store (powered by Kobo).