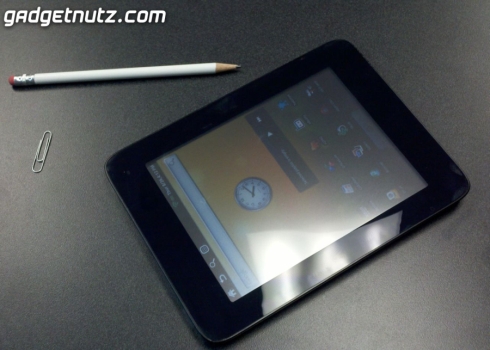 Velocity Micro plans to start shipping two Android tablets in the next 6 weeks or so. The Cruz Reader is a $200 tablet with a resistive touchscreen display that’s designed primarily as an eBook reader which also happens to run Android which means you can run third party apps, play videos, surf the web, and perform other actions. The Cruz Tablet is a $300 tablet with a capacitive touchscreen display and beefier specs.

While the Cruz Tablet sounds like an overall sexier device, the Cruz Reader does have a few things going for it, including the budget price tag. The folks at GadgetNutz got a chance to visit the Velocity Micro headquarters recently to check out the Reader in person, and it looks pretty nice. One surprising feature is that the device uses a user replaceable microSD card for its primary storage. That means you can expand the amount of available storage space both by sticking an SD card in the slot on the side of the tablet or by removing the back panel and upgrading the internal microSD card.

You can find a hands-on video after the break, or visit GadgetNutz for more photos of the Velocity Micro Cruz Reader.