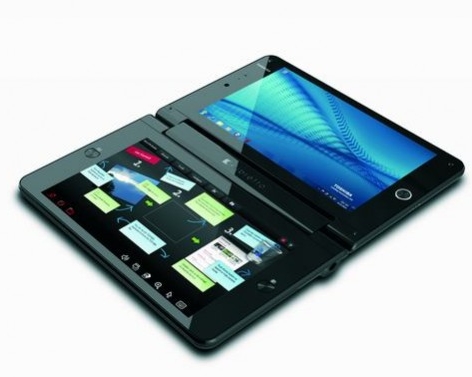 It’s not clear when Amazon or other US retailers will have the device in stock. And Toshiba is pitching the Libretto W100 as more of a concept device than a consumer device, which means that we don’t really expect a large number of these things to ship — unless they turn out to be surprisingly popular, in which case I’m certain Toshiba would ramp up production (and hopefully lower the price).

The $1100 dual screen device works as a laptop or a tablet. Both 7 inch capacitive touchscreen displays have resolutions of 1024 x 600 pixels. The bottom display can be used as a virtual keyboard — in fact Toshiba gives you 6 different keyboard styles to choose from.