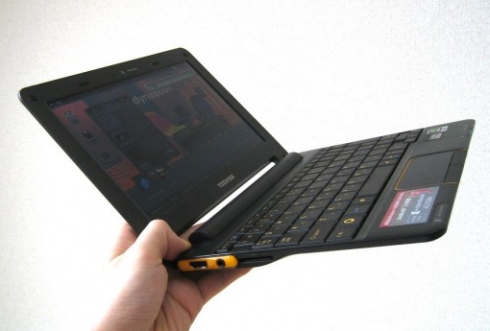 The Toshiba AC100 smartbook is now shipping in Japan, and Peter from Netbook News got his hands on one and has posted an unboxing video and a second lengthy video showing off the hardware, software, and user interface.

Overall, the hardware seems pretty nice and the netbook is designed to get excellent battery life while still having enough power to handle 1080p HD video playback. The mini-laptop also weighs just 1.9 pounds.

The software is another story. While I’ve pointed out in the past that Windows XP and Windows 7 seem ill equipped for touchscreen tablets because those operating systems are clearly designed for use with a keyboard and mouse, Peter suggests that the Toshiba AC100 has the opposite problem. It is a laptop-style device which uses a keyboard and mouse or touchpad — but the operating system was clearly designed for touch. Unfortunately there’s no touchscreen display.

Instead, Toshiba has configured the operating system so that you can scroll and pan by clicking and dragging with a mouse. But it doesn’t look nearly as comfortable as tapping and dragging with a fingertip. The web browser and other apps, on the other hand, don’t take full advantage of the keyboard and mouse. For instance, when you’re entering text on a web page, you can’t move from one text area to the next with a Tab button. And if you want to scroll through a web page, you can’t use the scroll wheel on a mouse — that will only move from one link to the next. Instead you have to click a mouse button and drag up or down.

If you don’t expect the Toshiba AC100 to act like a typical laptop, I suspect you could probably get used to its quirks. But I still think it would have made sense to include a touchscreen on a netbook running Google Android — or better yet, a touchscreen display with a swivel that would allow you to use the smartbook in tablet mode. Of course, that would probably increase the price.

You can check out Peter’s unboxing and hands-on videos after the break.