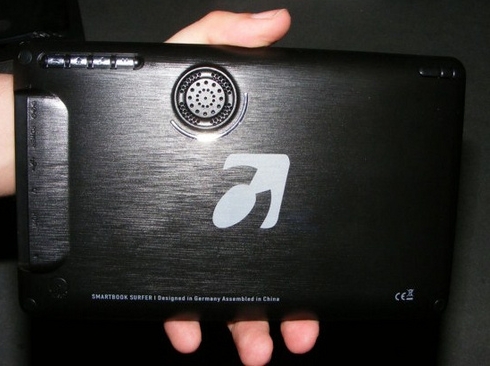 The Smartbook Surfer is a cheap Google Android powered tablet that’s available in Germany for just over $230. It also has the distinction of coming from Smartbook AG, the company which has been threatening to sue device makers, bloggers, and others over the use of the word “smartbook.”

The tablet is now shipping, and at least two people have received units — and they have the unboxing photos to prove it. One set of images showed up today at NewGadgets.de, while a member of the Android-Hilfe.de forums posted another set.And you know what? They look awfully familiar — and they should, because it looks like the Smartbook Surfer is built by the same folks who brought us the Augen GenTouch78.

It has the same telltale design elements including the round speaker on the back, the buttons on the back, a cheap plastic stylus, and the same texture on the back, which I’m going to call a “brushed plastic” finish for now.

There is one key difference though. The Smartbook Surfer has an HDMI port, while the Augen GenTouch78 simply has a spot on the case that says HDMI, but no actual port.

Both tablets have 7 inch, 800 x 480 pixel displays and run Google Android 2.1. Smartbook AG says says its tablet has an 800MHz processor, but I doubt that, since the GenTouch78 actually clocks in at 600MHz.

The tablets have 256MB of RAM, and 2GB of flash storage and 1400mAh batteries.