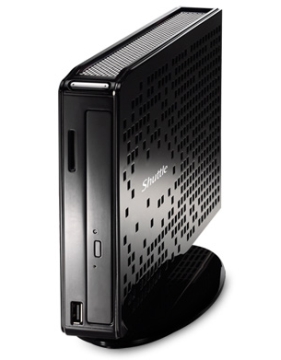 Shuttle’s XS35 line of nettops are just 1.5 inches thick, but unlike some tiny desktops on the market, the XS35 packs an optical disk drive. The little computer also has a ton of connectivity options including 5 USB ports, Ethernet, VGA, HDMI, mic and headphone jacks and a flash card reader.

The nettop has built in 802.1b/g/n WiFi and a dual core Intel Atom D510 processor. The base model comes with integrated GMA 3150 graphics, but there’s also a higher end model with NVIDIA ION 2 graphics for 1080p HD video output.

plus shipping. This model has 2GB of RAM and a 500GB hard drive, but ships without an operating system.

Newegg is selling the lower end models for $240