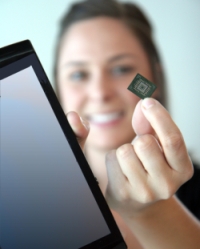 SanDisk has launched a new integrated solid state disk (or iSSD) which it describes as smaller than a postage stamp and lighter than a paper clip. The new iSSD comes in 4GB to 64GB capacities.

Of course, the new SSD isn’t much smaller than a standard SDHC card, and it’s actually quite a lot larger than a microSD card. But this is an integrated SSD, which means it’s designed to be used as the main storage for tablets, netbooks, or other mobile computers. It’s a lot faster than a removable flash drive, with read speeds up to 160MB/s and write speeds up to 100MB/s.

The SanDisk iSSD is currently being tested by OEMs, which means we could start seeing these little guys in actual products soon. The iSSD measures 0.6″ a 0.8″ x 0.07″.