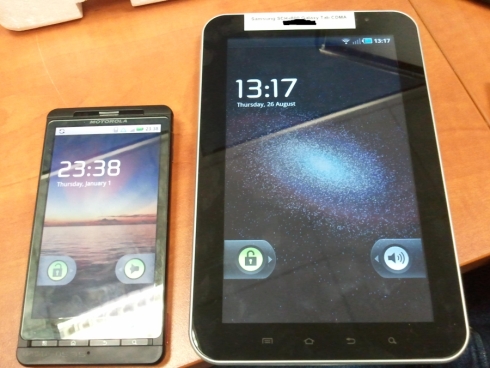 Either Samsung is really bad at preventing leaks… or the company has a brilliant PR strategy to ensure that its upcoming Android tablet appears in the news virtually every day. Last night the folks at OLED-Display.net got their hands on some images of accessories for the 7 inch Samsung Galaxy Tab, and this morning a member of an Israeli forum posted some new photos of the tablet.

The tablet images don’t really show us anything new — other than the fact that this is a 7 inch tablet that’s noticeably larger than a typical Android smartphone. But the tablet still looks awfully slick.

As far as accessories, it looks like there will be a 41 Euro leather case that also be used as a stand — much like Apple’s iPad case. There’s also a 54 Euro charging station with speakers and an HDMI output, and an 83 key keyboard which will run 82 Euros.

Those prices all seem pretty high to me, at $52, $69, and $104, respectively. But hopefully these accessories will be cheaper if and when they’re offered in the US.