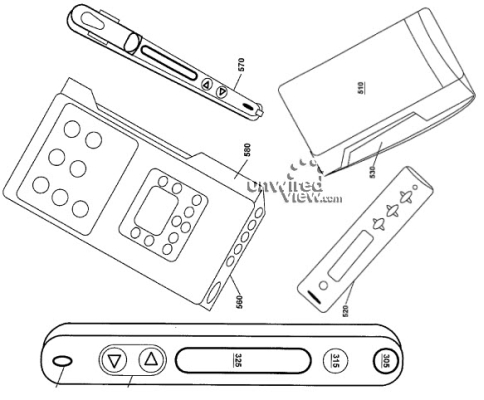 HP may have purchased Palm to get its hands on the WebOS operating system rather than the company’s hardware technology. But that doesn’t mean the Palm Pre and Pixi are the only things Palm has been working on. Unwired View dug up a patent application from April which shows an intriguing device which could function as a palmtop computer with a removable phone component.

In other words, it’s a handheld computer — but unlike the huge phones we’ve been seeing from Dell, HTC, and others recently, you don’t have to hold the whole thing up to your head to make a phone call. You can just pull out the phone component for making voice calls.

The phone would actually stay in communication with the base over Bluetooth at all times. But the handset is really just for talking on, while the base is used to dial calls, manage your contacts, or do just about anything else you’d expect a smartphone or portable computer to do.

Among other things, this would let you take an incoming phone call without closing out of an application currently running on your Palmtop. That means you can proceed to ignore your friend and continue reading that web page… or you know, look up directions to that restaurant you’re both trying to find without having to put down the phone.

The patent application is written in legalese, but it still makes for kind of interesting reading if this is the sort of device you’ve been waiting for.