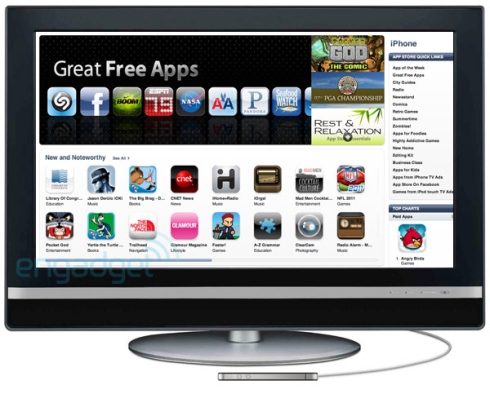 The Apple TV is a set top box designed to let you play iTunes music, movies, and other content on a television without running cables from a full-blown computer to your TV. The original Apple TV hit the streets in early 2007, and at the time people were already knocking it for only supporting video resolutions up to 720p.

Flash forward a few years and the Apple TV is long overdue for a refresh. And Engadget reports that it’s about to get one. Unfortunately, the next-generation Apple TV still won’t be able to handle 1080p HD video.

To be fair, I get the impression that the new device — which will be called the iTV — is designed as much for streaming web video as downloaded content, and it takes more horsepower and bandwidth to handle streaming HD content. And the new device, which will be much smaller than the original Apple TV will reportedly have the same low power A4 processor as the iPhone 4.

That said, there will be one major benefit of moving from the original Apple TV to a new iTV. Engadget reports that it will be able to run apps, meaning you may be able to play Angry Birds on your big screen TV. Or maybe just stream Pandora. It’s not clear whether it will run existing iPhone apps the way the iPad does, or if you’ll have to download and install apps specifically designed for the iTV.

No word on how much the new device will cost or exactly when it will be released, but Engadget suspects an official announcement this Fall.