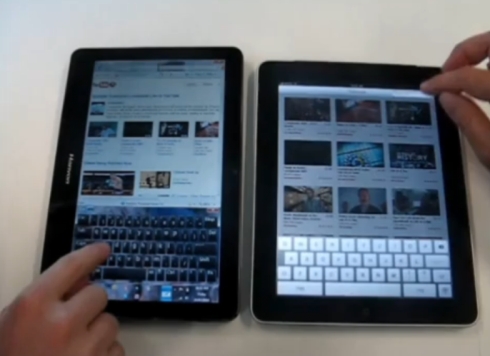 I’ve tested a handful of Windows XP and Windows 7 netbooks with touchscreen devices over the past year or two, and generally I’ve been pretty unimpressed. The impression that I get is that Windows simply isn’t designed for touch input the way Apple iOS and Google Android are. Sure, there’s support for some touch navigation gestures, but some user interface elements are too small to tap with your fingers, the on-screen keyboard is difficult to use, and most apps were designed for a keyboard and mouse, not fingertip or stylus.

But you know what? The problem might not be the software, but rather the hardware. I haven’t tested a good slate PC with a fast processor and a capacitive touchscreen display yet. But YouTube user lordfingle managed to get his hands on a Hanvon Slate PC running Windows 7 and he shot a side-by-side comparison video with an Apple iPad.

The Hanvon actually fares pretty well. Pinch-to-zoom features look a lot slower on the Hanvon, and while lordfingle seems pretty adept at using the on-screen keyboard, it still looks a lot smaller and tougher to use to me than than the iPad keyboard. But in terms of speed, the Hanvon tablet wins in most areas. It launches apps quickly, loads YouTube video in a flash, and features a webcam and USB ports to boot.

On the other hand, the iPad’s full screen apps like the email and calendar apps put Outlook to shame in for handheld use. While lordfingle seems pretty happy with Outlook, at about 2:41 when the Outlook calendar pops up on top of an email window I just shook my head.

The video also doesn’t look at any Windows apps that require hovering a mouse for navigation, or drop-down menus that might be hard to navigate with a thick fingertip. But overall, the Hanvon tablet appears to make a pretty good case for Windows 7 as a tablet-friendly operating system — if you have the hardware to back up the software.