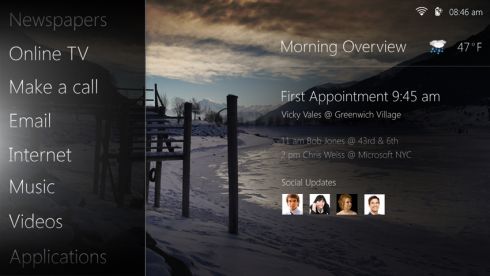 While the Apple iPad and Google Android powered tablets are taking the world by storm at the moment, companies have been pumping out Windows tablets for the past decade. But the Windows tablets of yesteryear tended to be large, expensive, and equipped with full QWERTY keyboards and touchpads allowing you to use the tablets in laptop mode. Soon we expect to see a rush of Windows 7 tablets hit the streets with more iPad-like shapes, sizes, and prices.

There’s one big problem though: While Windows 7 includes some touch-friendly features such as pinch-to-zoom, a larger taskbar, and gesture navigation controls, overall the user interface was designed for use with a keyboard and mouse. So we’re starting to see developers come up with custom applications that replace the default UI with one that makes the experience of using a tablet without a keyboard and mouse a bit easier.

One of the more interesting designs I’ve seen to date is something called Macallan. It’s still a work in progress, but you can see some screenshots at the company’s web site and check out a demo video below. It replaces the traditional Windows desktop with a large menu on the left side of the display which you can scroll through to see a list of finger-friendly activity hubs.

There are also a series of apps that have been designed for touchscreen tablets, including a calendar app and video browser. 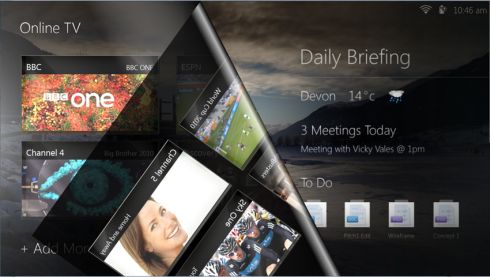 Overall, Macallan looks very nice — if you only plan to use the included apps. The truth of the matter is that there’s not much preventing developers from writing apps that make using the basic functions of a Windows 7 tablet just as easy as the basic UI on an Apple iPad. The problem arises when you move on to one of the main benefits of using a Windows 7 tablet — the ability for the tablet to run thousands of third party Windows apps that were designed for desktop and laptop computers.

A Windows 7 tablet can run the desktop versions of Word, Photoshop, Outlook, or pretty much any other Windows app. So while you probably wouldn’t pick up a $500 tablet with a 10 inch display and no keyboard to use as your primary computer, you can run the same software on it as you can on a desktop PC. And that’s pretty exciting — until you realize that those apps were all designed for use with a keyboard and mouse. When you try tapping on toolbars, selecting text, or even minimizing, resizing, or arranging windows on your desktop, it becomes clear that Windows 7 wasn’t designed to be touched with a fingertip — and window dressing like Macallan doesn’t really address that.

On the other hand, a Windows tablet with software like Macallan could become very useful if developers take to the platform and start writing third party apps that are finger friendly. Apple and the 250,000 apps in its App Store don’t have the monopoly on apps that are designed for capacitive touchscreen displays. It’s just that most Windows developers are only writing versions of their apps for high resolution machines with keyboard and mouse inputs.

In the meantime, while there may not be many Windows apps that are designed for Windows 7 tablets yet, a Windows tablet does support Adobe Flash, which means you should be able to watch web video and play web-based Flash games on a Windows 7 tablet running Macallan or other custom software. And maybe that will be good enough for some users.

You can check out the first Macallan demo video below. The company expects to launch the software within the next few months.