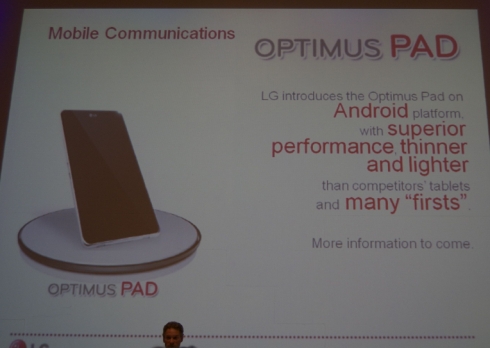 We’ve known that electronics maker LG was planning to enter the Android tablet space for a while. Now it loks like the companyis taking the first step. At an event in Brussels this week, LG unveiled its latest smartphones… and teased a new device called the Optimus PAD which is still in development.

There’s not much news to report about the LG Optimus PAD at this point. It will run Google Android, and LG promises that it will have “superior performance” and be “thinner and lighter than competitors’ tablets.” But talk is cheap — not to mention that the Optimus PAD won’t be competing with the current crop of tablets. It will have to take on all the new devices introduced at the IFA show in Berlin later this week.