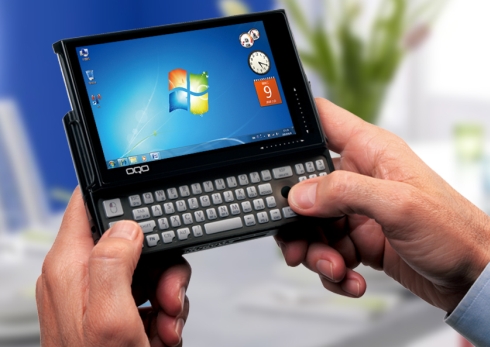 Long before netbooks were just a twinkle in… somebody’s eye, OQO was making full fledged Windows computers that you could fit in your pocket. The OQO Ultra Mobile PCs were tiny, but they were also pretty expensive and never really sold in large enough numbers to keep the company afloat, and OQO went under in May, 2009.

But UMPC Portal notes that a Chinese OQO site appears to have information about a new OQO Model 03. The Model 2 never made it to market, but the Model 3 devices actually appears to have decent, modern specs.That includes a choice of an Intel Atom Z515, Z530, Z540, or Z550 processor (ranging from 1.2GHz to 2GHz in clock speeds)>

Like earlier OQO models, the OQO Model 03 has a 4.8 inch touschreen display and a QWERTY thumb keyboard which slides out from behind the screen. The device will apparently have a 32GB to 128GB solid state disk, up to 2GB of RAM, a 1024 x 600 pixel display, and Intel GMA 500 graphics. It also packs a USB port, HDMI port, and an expansion port that can be used for VGA or Ethernet connections.

The Chinese company seems to be a former partner of OQO USA. So the new device could be legit — although I wouldn’t be surprised if it’s only released in China.

The OQO Model 03 doesn’t appear to be a budget device. The company is selling it for between $2000 and $4800 US depending on the configuration.