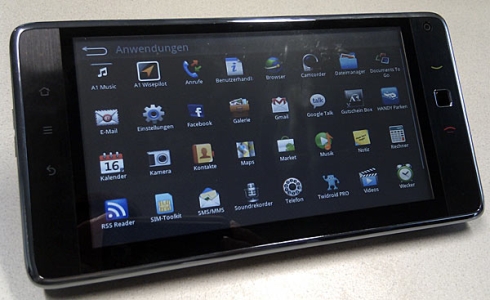 The Huawei S7 is a 7 inch Android tablet. There’s nothing all to unusual about that. But unlike some of the cheap tablets we’ve seen over the past few months, the Huawei S7 has a reasonably fast processor, a 3G modem and some telecoms are already bundling the tablet with mobile broadband service plans.

CarryPad noticed that it’s already available in Austria, where you can pick up the tablet for 99 Euros up front and 29 Euros per month for a 5GB/month data plan. And the folks at derStandard have posted a review of the tablet.

Unfortunately, the 768MHz Qualcomm Snapdragon processor and Android 2.1 operating system weren’t enough to make the reviewer happy. The camera app crashed a few times and picture quality wasn’t great. The battery life didn’t come close to the promised 8 hours of run time. And while you can use the tablet to make phone calls, unlike the 5 inch Dell Streak, there’s really no way to pass this 7 inch tablet off as a reasonable device to hold up to your head.

But the biggest problem was probably the screen, which derStandard describes as “cheap.”

The Huawei S7 has a 7 inch, 800 x 480 pixel resistive touchscreen. It doesn’t support multitouch, and the reviewer felt that touch input wasn’t very precise — even with a stylus.

I know there are some folks out there who actually prefer resistive displays to capacitive ones. But Android really was designed to be used with your fingers, not a stylus. I’ve poked at on-screen keyboards with a stylus before, and it’s always much slower than using two thumbs to type. Although I can’t say for certain if the Huawei S7 suffers from the same problem as the Augen GenTouch78, I can also say that some resistive touchscreen displays also require you to press much harder against the display than others. Not all resistive screens are created equal.

You can read more at derStandard.